Mortgage applications increased 4.1 percent from one week earlier, according to data from the Mortgage Bankers Association’s (MBA) Weekly Mortgage Applications Survey for the week ending July 17, 2020.

“Mortgage applications increased last week despite mixed results from the various rates tracked in MBA’s
survey. The average 30-year fixed rate mortgage rose slightly to 3.20 percent, but some creditworthy
borrowers are being offered rates even below 3 percent. As a result, these low rates drove a 5 percent
weekly gain in refinances and a robust 122 percent increase from a year ago,” said Joel Kan, MBA’s
Associate Vice President of Economic and Industry Forecasting. “There continues to be strong
homebuyer demand this summer, as home shoppers have returned to the market in many states.
Purchase activity increased again last week and was up 19 percent compared to last year – the ninth
straight week of year-over-year increases.”

The average contract interest rate for 30-year fixed-rate mortgages with conforming loan balances
($510,400 or less) increased to 3.20 percent from 3.19 percent, with points increasing to 0.35 from 0.33
(including the origination fee) for 80 percent loan-to-value ratio (LTV) loans.
emphasis added 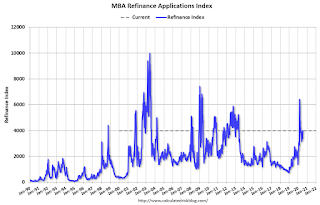 But the index is up significantly from last year. 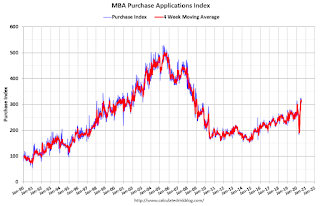 According to the MBA, purchase activity is up 19% year-over-year.

Roli’s $300 Light-Up Keyboard Is Like if Rock Band Taught You How to Play...