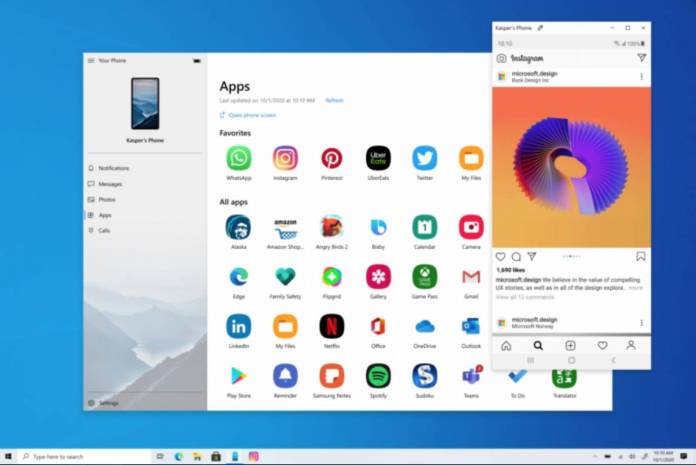 Microsoft previously announced a new Your Phone feature called Apps that would let you mirror the apps on your phone to your Windows 10 computer. But it only rolled out to Windows Insider users first of course but was expected to eventually become available for everyone. Well, that day has now come although the initial rollout seems to only be for newer Samsung devices. Nevertheless, this is a pretty important feature to have on the Your Phone app and hopefully, more Android phones get it in the next few weeks.

Basically, the Apps feature on the Your Phone app will let you see a list of all your installed Android apps on your computer. You can even add your most-used apps to a favorites section so you can access it easily. More importantly, you can launch any of the supported mobile apps from your Windows 10 computer and you even launch it in a separate window. The app can also be pinned to the Windows taskbar or Start menu.

When they initially announced it, only selected Windows Insider users were able to access Apps on their computers. But now Analy Otero Diaz, the Principal Program Manager Lead at Microsoft tweeted that it has started rolling out to more users. If the Your Phone’s entry screen switches over to Apps, then that means your device supports it. Currently, only Samsung devices like the Samsung Galaxy S9, S10, and S20 series are supported but we expect it to roll out to more Android devices soon.

The newest #YourPhone feature: Apps, has started rolling out further. So some of you may see your Phone screen entry switch over to Apps (even if you’re not a Windows Insider). Available on select Android devices https://t.co/2p00jSOkwn #FeatureFriday pic.twitter.com/bWArDMvBWw

There may still be some limitations to it according to Win Central, like some apps may actually block the casting to another screen. In that case, you’ll see a black screen. Some apps and games may also not respond to the PC mouse or keyboard which means it may only work with a touch-based computer. Also, the audio from your apps will not play on your computer but rather from your mobile device.

For now, we’ll have to make do with these limitations until everyone gets on board. Microsoft also says they will be rolling out later this year the ability to run multiple apps at the same time.

Trump’s demand the US get a cut of TikTok’s sale could set a dangerous...