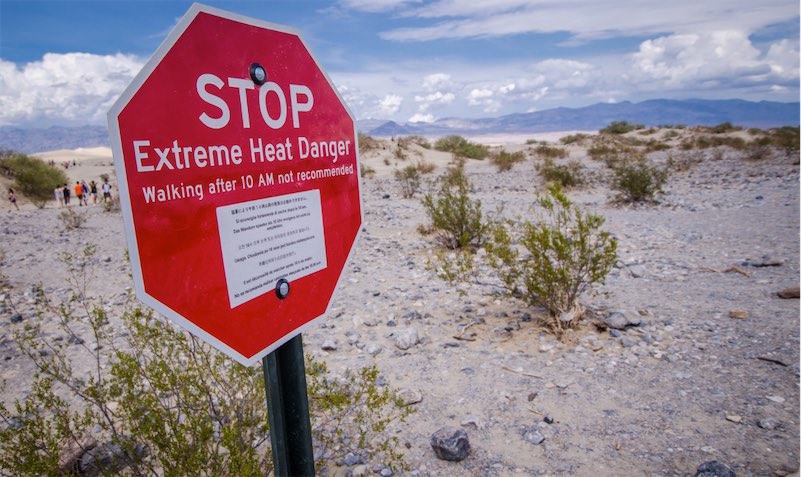 On Sunday, the temperature in California’s Death Valley National Park apparently hit 130F (54.4C), the hottest air temperature recorded on Earth in 89 years, and possibly ever. According to a statement from the National Weather Service, “As this is an extreme temperature event, the recorded temperature will need to undergo a formal review” by a Climate Extremes Committee formed to check the data. The last time a 130F temperature was officially observed was during a heatwave in July 1913 but that reading’s validity has been questioned. From Weather.com:

…A detailed blog published in October 2016 by climatologist William Reid and weather historian Christopher Burt concluded the 134-degree Death Valley high in 1913 “was essentially not possible from a meteorological perspective, using an officially sanctioned USWB (U.S. Weather Bureau – the predecessor to the NWS) shelter and thermometer and following proper procedures observationally.” They attributed these extreme temperatures in 1913 to observer error.

Death Valley has reached 129 degrees seven times in its records dating to 1911, most recently on July 1, 2013, according to NOAA’s ACIS database.

Firefighters battling the Williams Fork Fire near Fraser, Colorado said a change in winds was helping them, on Tuesday, August 18. Colorado fire officials say the wildfire “did not grow substantially” today due to northeast winds. As of Tuesday morning, 6,600 acres had already burned. This video, posted on Monday, August 17, shows an aerial […]

After making landfall in North Carolina last night, storm Isaias is set to rake the northeast megalopolis from D.C. to N.Y.C. today before heading to Quebec. With it comes the threat of tornados, a rare sight up east: “At least one person was killed after a tornado touched down in Bertie County, N.C., and caused […]

Antti Lipponen of the Finnish Meteorological Institute created this troubling but unsurprising chart of almost 140 years of temperature anomalies by country. The data used was from the NASA GISS, Land Ocean Temperature Index. You can probably guess what will happen.

Elevate your at-home bartending skills with these 20 fantastic items

One of these days, it might be ok again to have friends over. When that day comes, you’ll probably want to let the drinks flow. In that case, it might not be a bad idea to have a few new tricks to liven up your mixology game. You can’t just come back from months and […]

We were already moving closer to the day where every man, woman and child would have their own iPad before COVID-19, but now…it’s even more vital.  With distance learning and other activities, kids need their own working devices to handle schoolwork and beyond. Of course, nobody is looking forward to paying up to $1,149 to […]

One of the most fundamental principles of marketing is to bring your message to the places where your potential customers can be found. And one place people can be found online is YouTube. The video site sees 2 billion global users every month, and those users are highly engaged. And how’s this for impact…ads on […]

The new iPhone 12 is going to be late this year

I reviewed 587 resumes in 49 hours to help people impacted...