Mortgage applications increased 6.8 percent from one week earlier, according to data from the Mortgage Bankers Association’s (MBA) Weekly Mortgage Applications Survey for the week ending September 18, 2020. The previous week’s results included an adjustment for the Labor Day holiday.

“Mortgage applications activity remained strong last week, even as the 30-year fixed-rate mortgage and
15-year fixed-rate mortgage increased to their highest levels since late August. Purchase applications
were up over 25 percent from a year ago, and the demand for higher-balance loans pushed the average
purchase loan size to another record high. The strong interest in homebuying observed this summer has
carried over to the fall,” said Joel Kan, MBA’s Associate Vice President of Economic and Industry
Forecasting. “Despite the uptick in rates, refinance applications increased around 9 percent and were
almost 86 percent higher than last year. Both conventional and government refinance activity, and in
particular FHA refinances, picked up last week.”

The average contract interest rate for 30-year fixed-rate mortgages with conforming loan balances
($510,400 or less) increased to 3.10 percent from 3.07 percent, with points increasing to 0.46 from 0.32
(including the origination fee) for 80 percent loan-to-value ratio (LTV) loans.
emphasis added 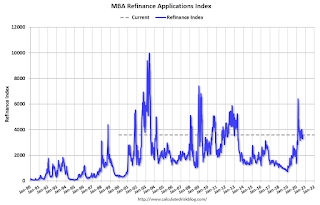 But with record low rates, the index is up significantly from last year. 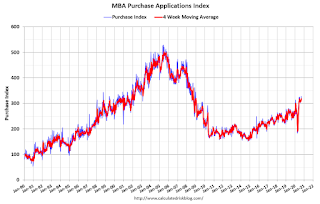 According to the MBA, purchase activity is up 25% year-over-year unadjusted.